Throughout this series of posts, we will show you how to set up and deploy an on-premise computer vision pipeline. Rather than ingesting live video feeds, we will focus on a pipeline that ingests pre-recorded videos. Video recordings are typically used for post-analyses and post-processing in such applications. Examples are: CCTV Feed analysis in security, post-match analysis of sports broadcasts, automated object annotation of video data, video summarization and compression.

While cloud-based solutions facilitate the creation of flexible and scalable machine learning pipelines, not every industry can take advantage of them. In some industries, on-premises infrastructure is required due to tight regulations. By others, like financial services, putting sensitive information in a cloud is considered too risky. Last but not least, some use cases require real-time data processing, and therefore, AI models must be close to the live data in order to avoid any loss in terms of inference time.

As a result, each layer of the shared responsibility model should be considered when designing, developing, and deploying on-prem ML pipelines.

This means that the following needs to be properly managed:

Let’s look at a hypothetical CV pipeline as illustrated below:

This pipeline would consist of 3 stages:

It follows that GPU usage management becomes a key-element in determining the overall pipeline's processing speed if we assume the majority of tasks are ML or DL-based in the 2 final stages. Therefore, a good heuristic is to always keep the GPU busy with the greatest inference performance. Optimizing input dimensions and batch size for each neural network is a low-hanging fruit. Increasing speed can also be achieved by using another neural network architecture, pruning models, or reducing model size through quantization, knowledge distillation, or weight sharing.

The read/write speeds of storage differ widely not only depending on the storage medium, e.g. HDD vs SSD, but also depending on how the data is stored. Various storage formats, based on media, promise improved reading or writing speed, data streaming, and even compression. This is closely related to the importance of selecting the right database to store the desired artefacts.

To conclude, on-premise servers should have a distributed but cooperative application structure that handles requests from clients/users and distributes them to different tasks/services. The main communication protocols between client and server are:

HTTP and gRPC both communicate over the network, but on different layers, the application layer and the transport layer, respectively. REST APIs are widely supported, whereas gRPC uses protocol buffers to exchange messages. IPC allows to share memory across different processes and thus alleviating CPU load in terms of I/O operations.

Probably one of the first steps toward implementing the aforementioned shared responsibility model would be to implement each task as a microservice. As a result, we can scale each service independently according to its unique properties and requirements. We can not only scale each service independently using Docker and Docker-Compose, but also create a modular and composable pipeline where each service can live in its own environment without worrying about compatibility issues between frameworks or libraries. In addition, we now have fine-grained control over which services may access GPU resources.

In this first part we’ll explain how to setup the following building blocks: 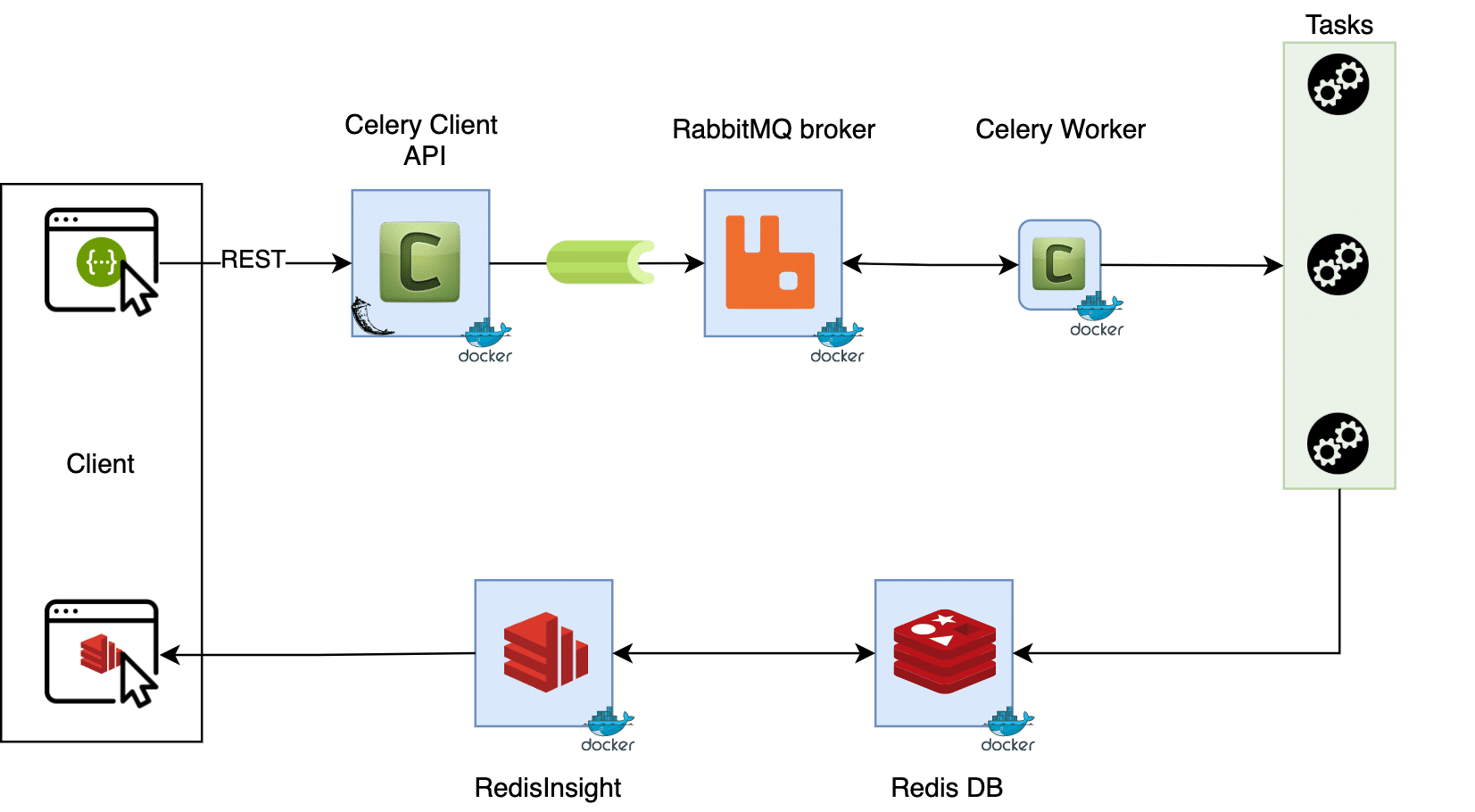 Applications can use task queues to execute long-running tasks while maintaining user responsiveness. In these queues, applications place tasks with enough data to allow them to proceed. In the background, workers monitor the task queues to perform the work. Afterwards, the results can be written back to another queue or even to a database.

Using Celery in Python, a supervisor process is created, which in turn spins up a bunch of other workers or executors. A client initiates a task by adding a message to the queue, which is then delivered to the worker by a message broker.

The message broker will be RabbitMQ, the results will be stored in Redis, and we will interact and inspect our database with RedisInsight.

An example of how to create a Celery application or instance is provided below. Celery’s main entry-point is here, where you can create tasks and manage workers. Celery must therefore be importable by other modules (more on this later).

A minimal Celery app contains a:

Despite not being mandatory, we have already defined the backend URL for storing our results. Furthermore, we define a processing route which is based on task names. Finally, we decorate our add task as to go through the processing task route.

With our Celery application defined, we’ll discuss how to interact with it through a REST API.

The Connexion framework and the swagger_ui_bundle package are used to build a Flask application that adheres to the OpenAPI Specification standard. We will be able to map Python functions to endpoints using Connexion, a framework on top of Flask. The swagger_ui_bundle contains the necessary static files to render the Swagger UI.

In order to create our Flask app, we specify a directory containing a detailed API description that is either YAML or JSON, as well as the Swagger package for rendering the UI.

Let’s have a look at the Swagger definition file:

The version of the OpenAPI Specification must be included in every API definition. As a next step, let’s look at the metadata related to our API:

Afterwards, we define the different endpoints (/process) in our API and the HTTP operations (post) they support. Each HTTP operation is then mapped to a specific Python function (operationID).

Parameters, which are passed via the URL path, can be described by defining their data type, whether they are required, and more.

Similar to the example above, tracing down the Python function from the operationId yields the following celery object:

Currently, the pipeline consists only of our addition function, which wraps our celery object along with our two parameters into a task invocation that can be passed to another function or to a network of celery workers. Celery’s signatures are used to accomplish this, allowing one to chain tasks into workflows as we’ll see later. Finally, messages are sent to our broker using apply_async().

Before moving on to the broker, let’s see how we can containerize the REST API and Celery worker. Finally, we’ll demonstrate how to use Docker Compose to define and run this multi-container application.

YAML’s anchors “&” allow us to duplicate content across our compose file by prefixing local variables with an “x-”.

Using Celery, we define the URL’s to the corresponding brokers and result backends. We use the same logging options across all services.

The Celery worker’s entry point can be explained like this:

As mentioned, RabbitMQ is Celery’s default message broker. Aside from Celery, RabbitMQ is popular because it is easy to use and lightweight.

An official RabbitMQ image will be used by the service defined in our compose file. Next, we declare the broker port, from which Celery can access the queue, as well as a port to access the user interface.

Redis is an opensource project that can serve as a database, cache, streaming engine, and broker. In addition to supporting many data structures, it is simple to install and easy to use. With RedisInsight, we can inspect and manage our database. As shown below, both services are instantiated from the official images.

With our final docker-compose file, we can spin up our Docker applications with:

where our environment-file contains the port-numbers and log-level of our different services.

Starting with our REST API at localhost:3333 we find: 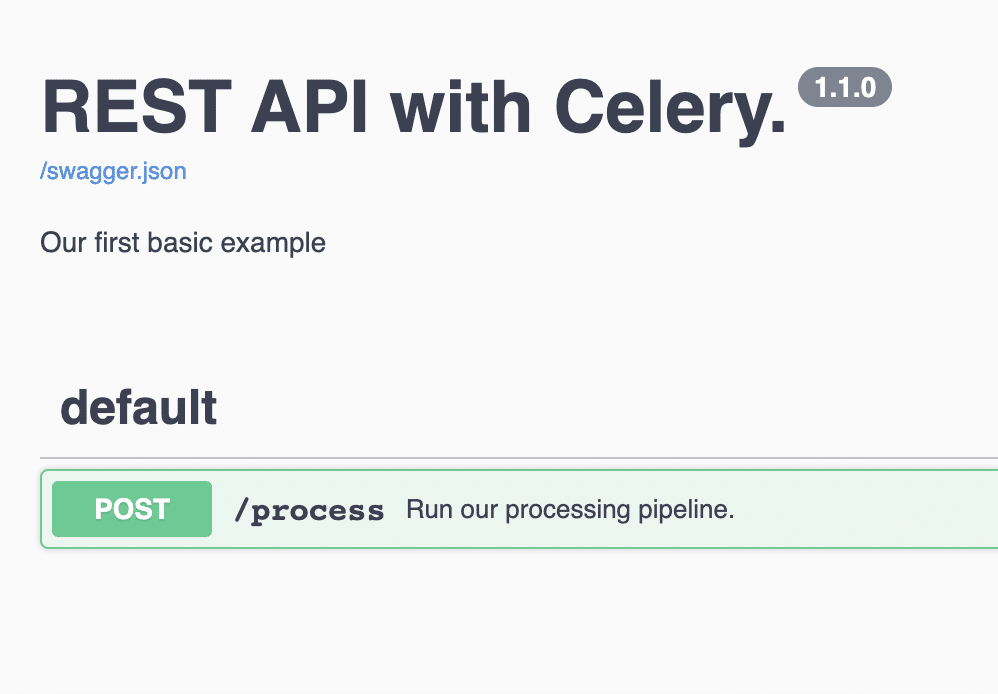 By opening the panel, we can send a POST request the /process endpoint of our API: 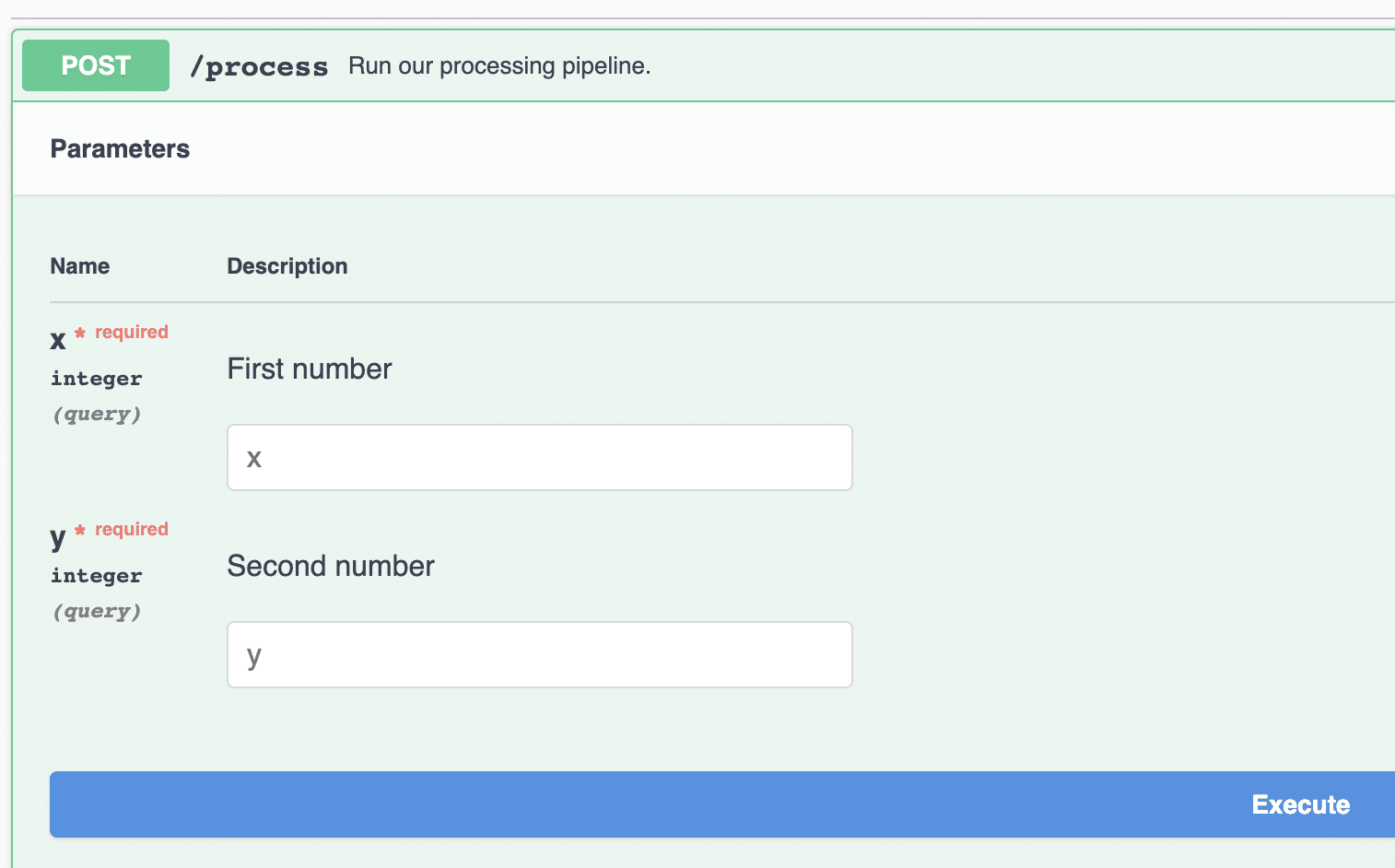 Inspecting the logs of our celery_worker service, we can make sure that the task got executed successfully:

We can now check if the result was properly stored in our Redis DB. The first time visiting RedisInsight at localhost:8001, you’ll be prompted to add your Redis Database. Afterwards, you should find a record in the browser tab with a task_id similar to the one we saw in the logs of our celery_worker.

Similarly, at localhost:15672 we can inspect the status of our queue(s): 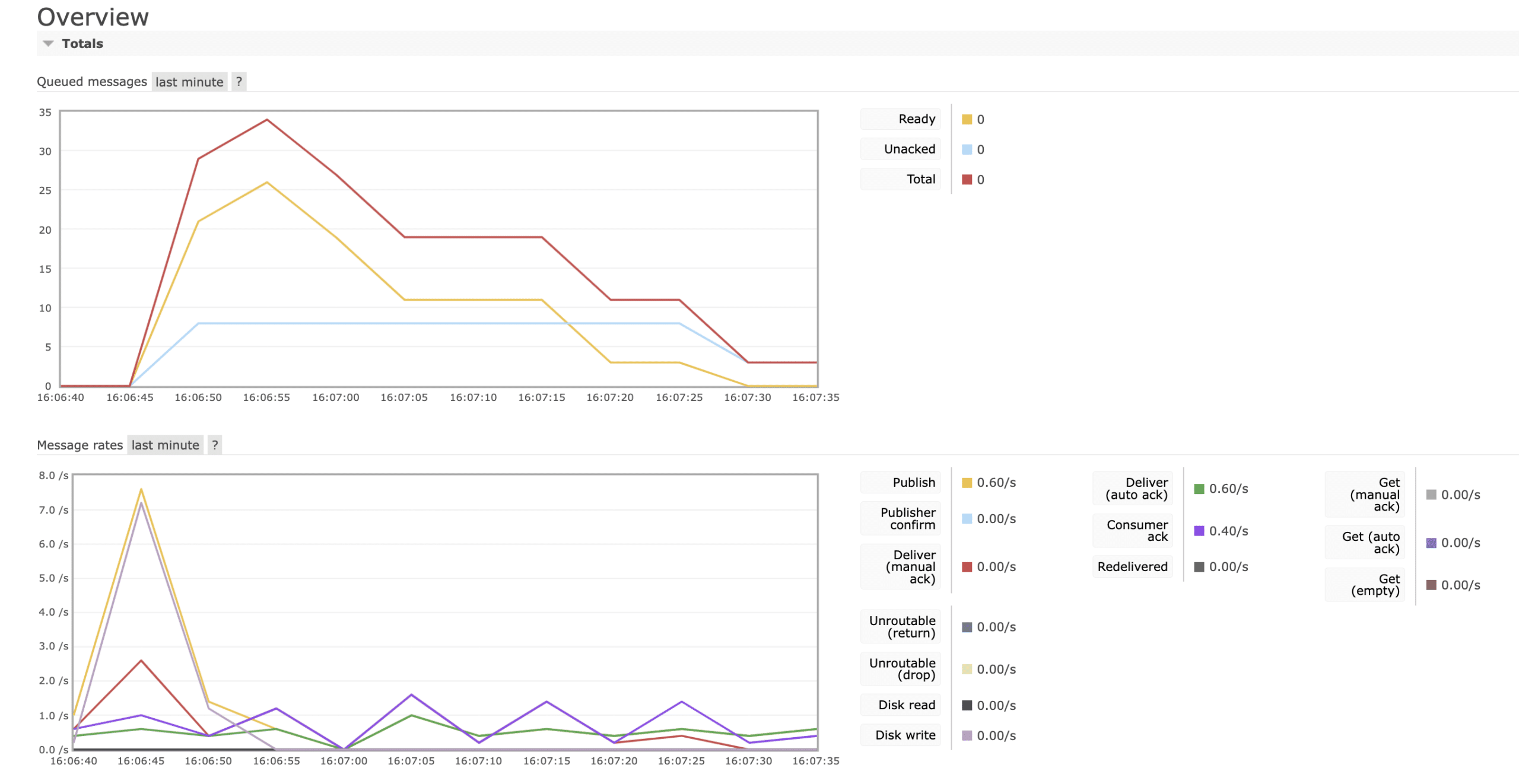 The above chart will show the status of the queue’s capacity. A ready message can be understood as a task waiting to be processed even if there isn’t a single consumer. Unacknowledged messages mean that the consumer has promised to process them but has not yet acknowledged that they are being processed.

This concludes the first part of this series where we discussed how to set up a local task queue using 5 docker microservices: 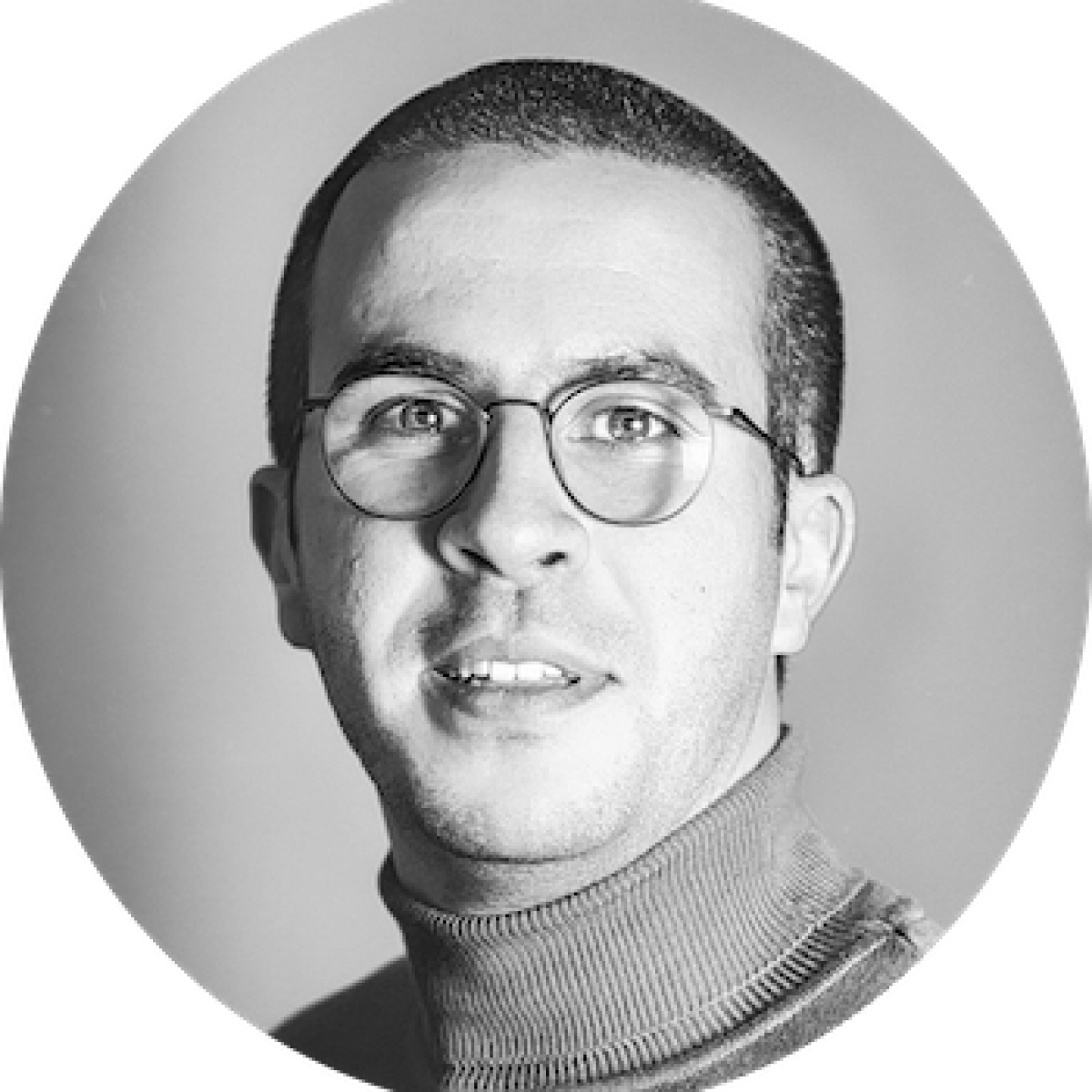 Ilias is an experienced computer vision engineer with a background in visual sports analytics. Since joining Faktion in 2021 Ilias has worked on optimizing computer vision pipelines both from a computational performance and accuracy perspecitve.

Behind the Scenes Faktion People MLOps

How to Deploy Sensor Data in Chemical Manufacturing